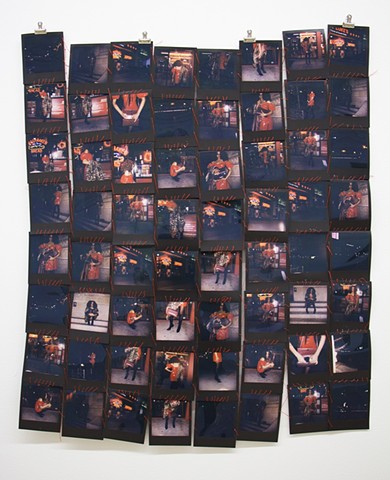 In Solicitations of Crimes Against Nature (2021), I depict myself in a series of Polaroids to dramatize the gaze of what an arresting officer may consider as visual evidence of a sex worker (or “nightwalker,” as termed by many laws). Referencing the five states (California, Denver, Massachusetts, New York, and Texas) with laws that prohibit the solicitation of sex, the Polaroid quilt evokes the ambiguous zone between someone soliciting sexual services and a woman walking alone at night.

Any one of the images could be interpreted as a femme having a night out, with personal belongings such as a backup phone, cash, and contraceptives. However, these objects could be used against me and often are against Black femme. Since many laws punish the solicitation of sex rather than the act and exchange of services, one simply only has to look like they are selling sex to be arrested, reinforcing a carceral system of surveillance against women.

The accompanying audio features the laws from California, Colorado, Massachusetts, New York, and Texas against sex work playing in a boombox. The ambiguity of the legal text demonstrates the slip between language and sight of the arresting officer. The work interrogates how surveillance and authority inform ways of looking in society.